James Thomas Peet established the Company in 1895, pioneering new land development, marketing and financing models to enable as many people as possible to achieve their home ownership dreams. An astute, courageous and innovative businessman who heralded from England, Mr Peet grew from a surveyor and draughtsman into one of Western Australia’s most respected and admired businessmen. Peet & Co opened for business on William Street in Perth, Western Australia in 1895. In the final years of the 19th century, James Peet became a sworn valuer and was appointed a Government land agent and, despite challenging times for WA in the years after Federation in 1901, his real estate business did well. In those years and beyond, James Peet forged a rich tradition that lives on today – subdividing land for new homes and marketing property subdivisions, representing companies and syndicates in literally dozens of estates. 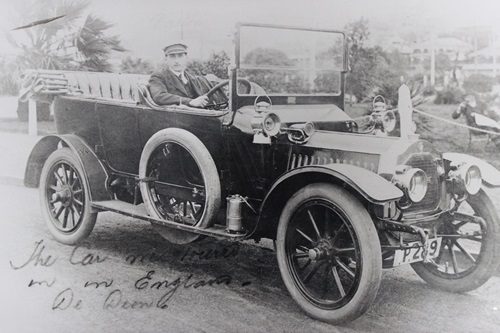 Innovation was a way of life for the energetic James Thomas Peet who, in the 1900s, was quick to introduce new witty advertising, flexible finance options, chauffeur-driven cars to ferry buyers to new estates, auctioneers and architects to help design new homes. We were even the first to create a forerunner to the modern Sales and Information Centre – a cottage at Perth’s Claremont Showgrounds where estate plans, pamphlets and property lists were on display. Western Australia basked in the benefits of its first gold rush in the early 1900s. As finance and property sectors in Victoria, New South Wales and Queensland felt the full brunt of the world depression, WA’s population almost trebled in less than a decade, reaching 180,000 at the start of the new century. This growing population needed somewhere to live and many found their homes with us. The 1950s was a period of expansion as Western Australia’s population boomed again and there was a post-war housing shortage. Western Australia was estimated to need another 50,000 new homes for a population that had grown by 45 per cent in the 12 years to 1959. By mid-century, we handled 83 estates, with blocks for sale across Perth’s suburbs including Scarborough, North Perth, Inglewood, Bayswater, Osborne Park, Westminster, Mirrabooka, Malaga, Bassendean, Kalamunda, Cottesloe, Peppermint Grove, Redcliffe, Victoria Park, Cannington, Canning Vale and Dalkeith. Typical of the era, most land developments were small area subdivisions with blocks of around 32 perches (as was the measure then), or 800sqm, with 10 per cent set aside for public open space. The Great Depression (1929-1939) and Second World War (1939-1945) took its toll on the whole community and we were not immune as people struggled to meet home and rent payments. As the Depression cut deep, James Peet gave generously to the Lord Mayor’s Unemployment Fund and other worthy causes to help those in need. We also responded to community needs and hastened to help provide low-cost housing on five acre blocks at Maddington, where house and land packages were sold for £75. In 1935, after a short illness, James Peet passed away and his son, Cyril, and R.T. Fergie took over the business. We’re proud to have played a role in establishing some of Perth’s most well-known suburbs – at prices that would make homebuyers green with envy today. Peet’s Dalkeith Estate in Freshwater Bay, Claremont, opened in 1913 with lots available from only £20. Today, properties sell for millions. For decades, we were associated with Scarborough Beach and its surrounding suburbs, with development initially promoted as a weekend escape 14 kilometres from the city, while suburbs like Victoria Park, Carlisle and Kalamunda boomed as land was promoted for sale at ‘low prices and on the easiest terms in Australia’. The Triple Entente at Bickford, 1914

Our ongoing commitment to affordability

Through booms and busts, upswings and downturns, we have responded to customers by delivering products that meet market needs. Our innovative products started early when Peet & Co offered buyers a tent (priced from £3) they could live in on their block at the Bickford Estate before their home was built in the early 1900s. Advertising at the time proclaimed: ‘If you’re on a building bent and haven’t a cent, we’ll start you with a tent. Go to Peet!’ Our affordable options today are a lot sturdier and comfortable, including townhouses, terraces, house and land packages, cottage lots and apartments all designed to keep quality consistent but costs low for homebuyers. James Peet was extremely active in sport, culture and the arts – and always keen to support the war effort, community groups and worthwhile causes. It’s a tradition of community involvement we continue today across Australia. Through our community grants and partnership programs we support for major not-for-profits through to small community groups across the country – promoting local initiatives in the arts, education, sport and sustainability. As part of our 120th anniversary celebrations and in recognition of the patriotism of our founder, James Peet, we’ve initiated programs with organisations who support Australia’s defence personnel and their families, as well as the most disadvantaged people in our communities who often do not have access to their own home. At the start of the new millennium, we purchased our first estate in Queensland and expanded our residential and commercial developments in Victoria and Western Australia. In August 2004, we purchased our first piece of land in New South Wales and listed on the Australian Stock Exchange (now the Australian Securities Commission) later in the same year. By 2006, we were proud to offer the largest residential land syndication business in Australia and to change our name from Peet & Co to Peet Limited to reflect our modern business operations, while retaining our rich link to the past. In 2015, we celebrated our 120th anniversary and finalised the full acquisition of CIC Australia. This has expanded our reach, and the diversity of housing options we offer, to all mainland Australian states.